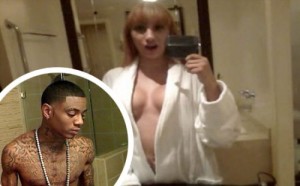 This week our Hoe Have A Award goes to Soulja Boy.

Here we were thinking after Soulja Boy called Kat Stacks the “scum of the earth” that he hated her; we were sadly mistaken. Soulja Boy on KYSDC not only does it seem like he is on that stuff  during the interview, but he said that he loves, Kat Stacks!

He goes on to say that he doesn’t do coke, that he has never been to rehab and that he and Kat Stacks verbal scuffle over Twitter was nothing more than the typical break-up argument.

He wants to be called “Dre” in-fact he admits if you call him “Dre” he’ll like you.

How in the hell are you going to love someone who basically put you on blast about your little pee pee problem and coke issue. Do us a favor and accept your award this week?