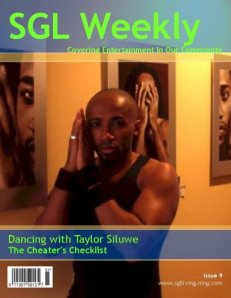 Life is so very precious and we take each other for granted thinking that, that person will be there tomorrow. Well tomorrow is not promised for any of us. I received some very sad news last night that Activist/Author Taylor Siluwe passed away on Sunday afternoon. Taylor was a great and sweet man that dearly cared about his lover,family, friends, and community. I first came to know Taylor years ago through his different articles he had written in various publications. So it was only befitting when I started SGL Weekly to interview someone I had love and followed. If there is a lesson in this don’t forget to tell people what they mean to you today. Put all the foolishness aside and move forward. Taylor’s fight for community will not die and his message lives on. Though his earthly body may have left us, his spirit will live on. We love and will miss you doll. Rest in peace. We have include some previous interviews he had done with SGL Weekly Magazine. Please go out and purchase a copy of his books “A Taste of Cherries” and “Dancing With The Devil”.
Issue 51
How Taylor, How are you doing?
I’m great, thanks for asking.

It’s been a long time sense we last chatted for the magazine. What have you been up to with in the past year?
Aside from acquiring and renovating an old house in Jersey City, I’ve been finishing my follow-up to Dancing With The Devil – ‘Something About Sin’, and gearing up to put the film inspired by ‘Dancing…’ into production. We’re beginning preliminary filming next week. It’s been a long time in the works, but seeing it to fruition is one of my many dreams.

Who is Taylor Siluwe for people out their that don’t know you?
I’m a writer fascinated by the horrible things people do for love, sex, money. Other than that, I’m just an average Joe, a regular guy – who happens to love street photography, tiny dogs, killer fish, pretty boys and the dark side of human emotions (not necessarily in that order).

What is your new short story about “A TASTE FOR CHERRIES”?
Kyle is a total narcissist who, like the title suggests, loves his cherries – and will stop at nothing to get them. Clearly, we’re not talking maraschinos.

What drama happened with it in the past?

A Taste for Cherries was my first ever published short story. Unfortunately, I found out about it after the fact. The story was on my old website (House of Blah) in ’99 as a continuing drama, a lusty gay soap opera I guess. Apparently, part one had been lifted and published. I googled the L.A. publisher and found they were having a book signing in NYC that weekend. Naturally, I was there. Naturally, their their faces fell when I introduced myself. They gave me two copies of the anthology and I suggested we go out for a late dinner after the event – and talk.

They agreed, but soon dipped out and I never saw them again. I was torn about the whole thing. But seeing my name in print outweighed the bad. Regardless of how it came about, I was a published author at that moment in 2002, and I haven’t looked back since.

But it’s nice that I’ve released A Taste for Cherries on KINDLE and actually get paid for it this time.

What can we expect from you in the future?
Many, many things. I sit out in nature and dream. I have tons of unpublished stories in my archives, humor, fantasy, horror, erotica, so they’ll be many more books and collections. And then there’s the film world. We have only a handful of filmmakers covering our stories, black-gay-centric stories, so there is a serious void to be filled. And like I said, my black gay stories are dark but real – like the narcissist who’s sole focus is popping his next cherry at all cost.

Tell me something about you that your readers may be surprised to know?
I’m a nature boy. I love getting my hands in the dirt and making things grow. Always have. I picture myself in a former life running through the forest in a loincloth, like in Apocalypto, probably raping and pillaging. Great movie Apocalypto, too bad Mel Gibson made it.

How can people get in contact with you?
Through SGLcafe.com or TaylorSiluwe.com. I’m pretty easy to reach.

Thank you Taylor, Do you have anything else to say?
Thank you, Cleavester, and good luck with SGL Weekly. I know it’s not as easy as you make it seem. You keep the magazine poppin’ and I’ll keep dreaming up new things to talk about. Deal? Issue 9
What is Dancing With The Devil about?
It’s tough to categorize “Dancing with the Devil” in a blurb. But basically it is a collection of stories about a single character, Danté, whose obsessive nature takes all around him to Hell and back. The opening story ‘When Romeo Wakes’ finds Danté in a pretty disasterous state talking to his unconscious Romeo after a botched break-in. The following four stories then serve as a flashback on Danté’s life and previous obsessive behavior, his different dances with the devil. By the end, I hope you understand Danté a little more. And maybe yourself as well, ’cause we’ve all got a little Danté in us.

I loved the book, but why did you choose to do a e-book instead of a traditional book.

I was urged to do it, and I’m glad I did. Working with ChumaSpiritEbooks is what brought the project into focus. The paperback wouldn’t be here if it didn’t start there. And print media is slowly dying anyway, and with the advent of KINDLE and being able to store your entire library in that little gizmo — how long will it be before we read all our books that way? And, it saves trees.

Will any of the character come back in the future?
Danté will be back, without a doubt. I love Danté. I would screw Danté – just as sure as he’d break my heart and run off with my little brother.

Are you going to tour with this book?
Absolutely.

Who is Taylor Siluwe?
When I find out, you’ll be the first to know. Well, the second.

Growing up what did you dream of becoming?
A scientist. I was the loner mad scientist kid who injected beetles with kitchen chemicals trying to create Bugzilla. I didn’t get the writer bug until high school.

What is your dream for the SGL community?
To stand up and be noticed. To shake off the shackles of our years of subjegation at the hands of our own people. The black community and its churches will remain embarassingly homophobic until WE stand up and say enough. The white gay community can’t do it for us.

Do you think we will over come this racism/sexism in our community?
I wouldn’t say “overcome”, but we’ll get a handle on it. Some people will always be racist, just as some will always be hopelessly stupid.

You have been writing for a lot of publications over the years. Where do you find your inspiration?
I don’t know, I guess things that motivate me. Like when I black gay person is assualted or killed and press coverage is tentative at best, and the ensuing outrage from the community is light; it always makes me think of the sea of black gay faces who fill the events every year and the beach parties. If we could only mobilize that force to express our outrage, the black holier-than-thous would know that the gay rights movement ain’t just a white thing.

What a fearsome sight we are in great numbers. Getting that message across motivates me.

What do you want your legacy to be when you leave this planet?
Legacy is a big word in a little box. Honestly, I can’t think about that. I guess that’s for other people to surmise a century from now.

What do you look for in a guy?
Probably all the wrong things – the things I write about, the things most people won’t talk about, the things that make my dick swell. In “Dancing with the Devil”, Danté lusts after beautiful, broken, bad boys up to no good. I wonder where he gets that curious habit?

What are you reading?
I just downloaded Lee Hayes “The Messiah” on my KINDLE. I can’t wait to dive into it.

What is on you Ipod?
So many things. I’ll give you the most surprising, Kenny Chesney.

I fell in love with his song “Dancing for the Groceries” – and not just ’cause I love strippers. I’m also feelin’ his cut “Demons”, ’cause we all chase them, and then they chase us back.

Who do you think is the next big person in the community?
Hopefully someone reading this article, someone who’s never been an activist, someone finally inspired to stand up say ‘Enough!’

How can the people get in contact with you?
Through my website — SGL Café.com, or my email info@SGLcafe.com.

Thank you Taylor, Do you have any final words?
Thanx for letting me ramble this Sunday morning in NYC, but a brother got a marriage equality rally to get ready for. We all have to do our part people. They say marriage equality is a white gay thing — well, I’ll be standing smack-dab in front of the camera saying its not.

And funny thing is, I don’t even wanna get married. But this is all about the principle, all about “the man” telling me I can’t. And we can’t let him get away with that, can we? 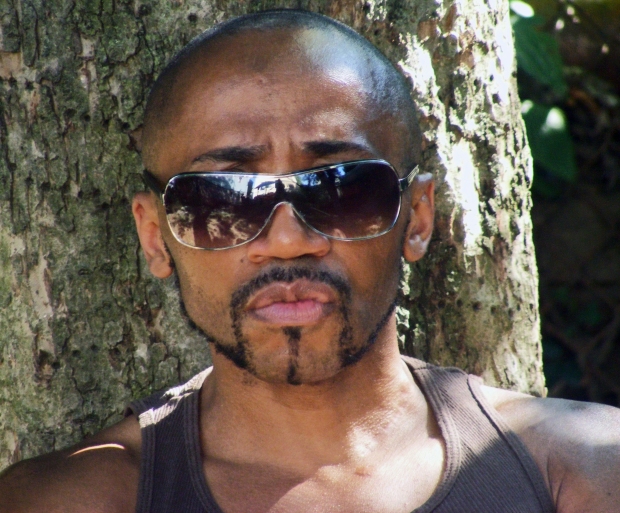